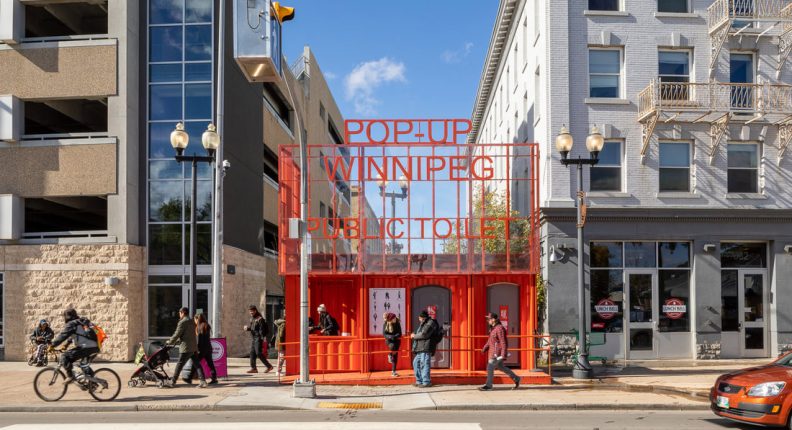 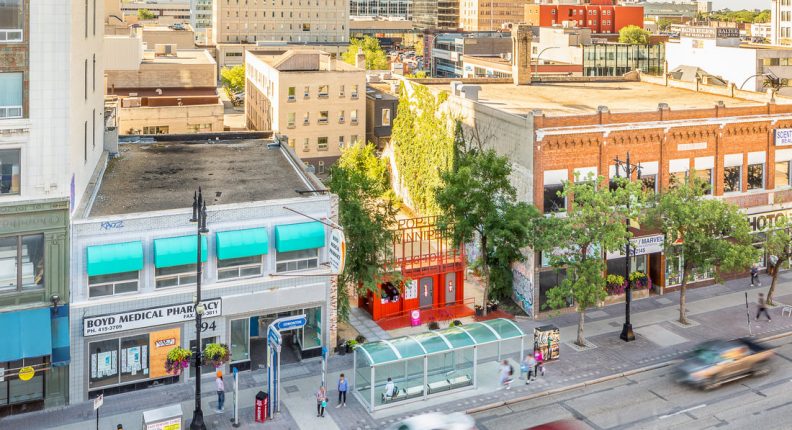 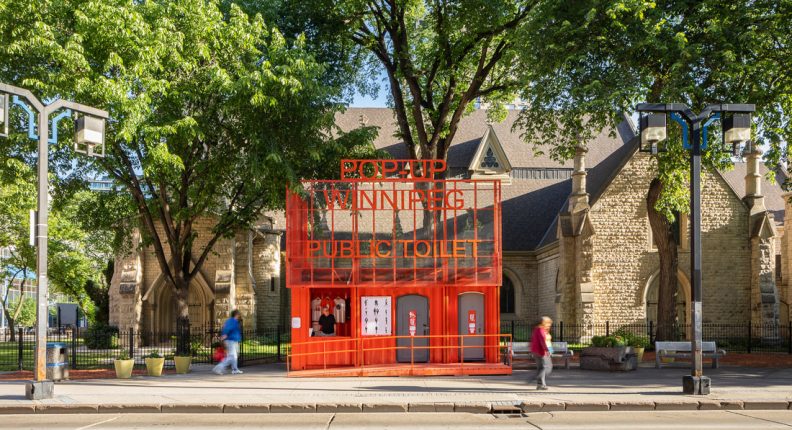 The Pop-Up Winnipeg Public Toilet answers Canada’s 2012 commitment to the United Nations recognition of the human right to basic sanitation as essential for an adequate standard of living. The initiative aims to lead by example through providing an accessible, clean, secure, well-maintained, monitored public washroom facility. The facility was designed to be temporary and moved every few weeks to various downtown locations over the summer. The goal was to encourage publicity for future sponsored permanent toilets, by generating general public consciousness-raising and support.

The Pop-Up’s highly visible and bright orange iconic structure (from a shipping container) plays literally on “pop up.” It features a sloped walkway and acrylic glazed double walls, which slide up smoothly whenever the facility is open. When closed, the acrylic walls slide back down. The Pop-Up was designed to be movable and robust, and migrated to different sites every month during the summer of 2018 to heighten downtown visibility. The project celebrates dignity, accessibility and inclusivity for all.

The Pop-Up involved a partnership between BridgmanCollaborative Architecture, the Downtown Winnipeg BIZ and Siloam Mission, a local non-profit.

In tandem with the Pop-Up, BridgmanCollaborative Architecture also mounted an advertising campaign on downtown bus shelters. A dozen posters displayed quotes and images of Winnipeg residents who volunteered to contribute their time and their experiences of public toilets in Winnipeg. They were shown in cross-legged poses that expressed the urgent need for public toilets, with the text “My Winnipeg includes Public Toilets” emblazoned below, along with a quotable quote from their interviews.

The Pop-Up Winnipeg Public Toilet has captured the imagination of people in Winnipeg and beyond, generated enthusiastic media coverage, and stirred conversations recognizing the importance of human dignity and access to public toilets in our downtown.