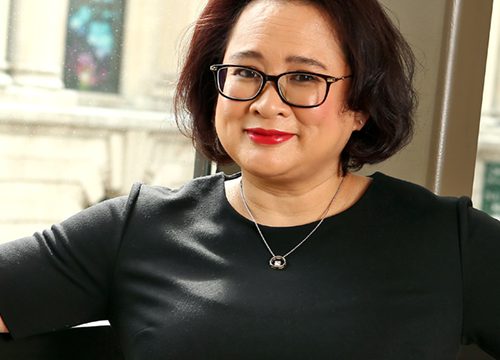 Through small urban contextually appropriate projects, urban acupuncture and the archeology of local knowledge facilitate social and physical changes in the larger context beyond the district. This type of placemaking technique serves as a catalyst for the regeneration of dormant social networks and capital exchange.

The Allegheny Overlook, or ‘AO,’ was a brand-new pop-up park that transformed a portion of Fort Duquesne Boulevard in Downtown Pittsburgh, highlighting live performances, arts, and culture while showcasing one of Pittsburgh’s most iconic riverfront views. The pop-up park reimagined a peripheral boulevard and an underutilized riverfront park in the city’s urban core, creating a more vibrant Downtown in a city rebounding from the effects of the pandemic.

Every downtown faces the challenge of vacant and blighted commercial buildings. These problems often appear intractable and frankly beyond the reach of an urban place management organization. Learn how two cities decided to step up and tackle this problem head-on with a data-driven approach using both carrots (incentive outreach) and sticks (litigation). Hear about what worked well and what didn’t.

Congress Heights Community Training and Development Corporation developed a framework for investing in a place-based inclusive economic and social development strategy centered around Congress Heights. It was built on extensive community engagement with a broad variety of stakeholders, from large developers to local youth, to city economic development officials, to local civic association members and more.

As cities continue to grapple with storefront vacancies, short-term retail concepts are becoming essential to re-establishing the density of commercial districts and creating new, affordable business opportunities for local entrepreneurs. Find out how cities are supporting pop-up retail and dining by lowering barriers to entry for small businesses through regulatory incentives and comprehensive pop-up retail programs, with examples from California and Tennessee.

Alley Gallery is a program created by the Louisville Downtown Partnership (LDP) to bring under-recognized spaces back to life, enlivening dingy single and double metal service doors with artwork created by metro-area artists. More than 300 potential public and private doors in the target area are candidates for the program. Participating property owners are provided with access to a Dropbox featuring existing artwork by local artists from which to choose.

In March 2016, the Midtown Association partnered with local a property owner, a local artist, and trash hauler company Waste Management to introduce the first art-wrapped dumpster in Sacramento, CA. The pilot project also served to support the city and county’s ongoing efforts to reclaim public spaces while reducing blight and other negative activity related to dumpsters and alleyways. All of the dumpster art-wrap projects help promote collaboration among a diverse group of community members.

A look at historically popular areas that went through an idle period, but have since seen a resurgence through a combination of means (space management, economic development, etc).

In December 2018, the Downtown Center BID launched DTLA // IRL  a multi-faceted pop-up activation showcasing Downtown’s culture, community, and commerce. The project comprised three main elements: a visitor’s center, retail store, and event space, and served as a promotional vehicle for the Downtown retail market and a variety of local businesses, highlighting local art and culture, and engaging the local community of residents, workers, and visitors.

Downtown Rideau Business Improvement Area (DRBIA), in partnership with the City of Ottawa, expanded an initiative initially designed by the city as a project to reduce graffiti removal maintenance costs on utility boxes by vinyl wrapping them in a transit motif design. The D.R.B.I.A took the initiative to an entirely different level by building on its brand as Ottawa’s Arts, Fashion & Theatre District and turning the utility boxes into original works of art.

The people of downtown Vancouver wanted a connected series of activated alleyways that are welcoming spaces with hidden gems to discover galleries, restaurants, and art walls. Between April 2016 and September 2016, DVBIA worked with the city to obtain permits, developed partner agreements, did construction, and launched the laneway. The More Awesome Now Laneway project was referenced in city council’s approach to creating a new places and spaces strategy for downtown.

Uptown is a unique area in Auckland, that includes 3 arterial roads, and encompasses four distinct suburbs. It became a major focus for Uptown to create a sense of place’ and cohesion, while bringing some color and life into the area. In the heart of Uptown is a water reservoir that presents a large concrete facade, and the ideal space to create a piece of vibrant, colorful artwork to provoke some much-needed connection, conversation, and engagement with the area.

The 34th Street Partnership (34SP) had a problem: the proliferation of many poorly-maintained, dirty, and often empty newsboxes  single units vending a single publication – on the sidewalks. 34SP addressed this problem by developing 34SP-branded “Newsracks,” each capable of holding multiple publications. They believed that, if provided an alternative to the traditional standalone newsbox, publishers would forgo the less attractive option and instead place their publications in 34SP’s units.

The small city of Oswego parlayed a $10 million state grant into more than $50 million in new downtown investment. Even after years of decline, Oswego retains some important assets to build on: walkable scale, historic buildings, and a beautiful setting on the Oswego River. The city won state funding to create a plan that identified specific projects, explained how they would benefit downtown, and showed that they could attract other money.

Public space and alley activation are the hot new topics in the place management industry. This presentation shows how different districts are activating their neglected public spaces and alleys and incorporating art.

From empty alleys to mall parking to sidewalks, the uncommon spaces of a community can provide the perfect location for “outside the box” events designed to revitalize the area. By activating these forgotten spaces, you can make the most of these unused urban assets and bring new life and crucial economic development to your community.

Teaming Up To Clean Up showcases partnerships with local stakeholders to clean and beautify their cities. Best practices include businesses and communities working together to improve storefronts, and reduce graffiti and litter while focusing on cigarette litter, recycling, and needle waste. Case studies in this presentation show how organizations can achieve best practices in maintaining cleanliness and building vibrancy in urban settings.